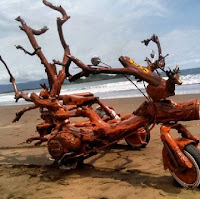 The presence of technological innovations sometimes make us quickly bored with what is owned today.

But different from the antique goods, where almost everyone is always looking and never bored to be able to have things related to the word antique language, including among others is to have an antique motorcycle.

To modify the motorcycle into an antique is the right of every owner. But vehicle modifications must remain in accordance with applicable rules.

Because, do not let the incident that hit the motorcycle engined vespa with wooden frame using 4 wheels, until the original form does not appear again this is secured by the Police Bojonegoro, Indonesia you will also experience. 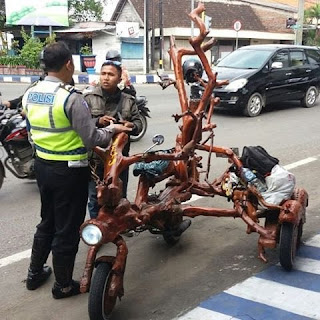 The motorcycle was secured by police officers Bojonegoro, Indonesia when it was held a raid, because it is considered not in accordance with the required technical specifications. 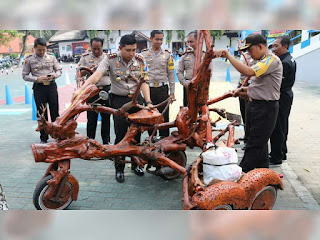 So the motor is done security, because it is very dangerous for motorists themselves and for others. The wood roots that were secured by the police officers had once taken part in a big event or a modified Suryanation Motorland modification event in Bali.

Read Now :  BUSINESS IS NOT SMOOTH, OR NEWLY ESTABLISHED. TAKE ADVANTAGE OF THESE, TO BE SUCCESSFUL

This motorcycle is named Veyu aka Vespa Wood, its base Vespa PX 150 E. But by modifier, has lost completely identity Vespa Italia his, be this Veyu. 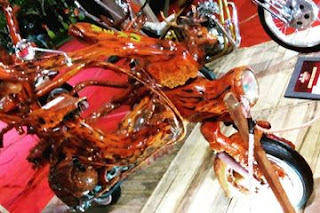 Motorcycle Vespa wood roots secured by police in Bojonegoro this, reportedly belonged to a young man (Edi Hartono) who came from Jember, Indonesia.

So the vespa journey of the roots of the wood, began to participate in the contest modification until the police secured because it is considered inappropriate to be on the highway. 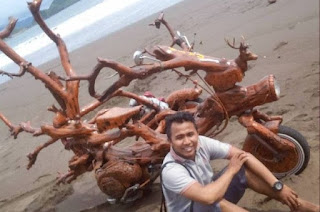 Hopefully with this event the owners of antique modified vehicles to be more introspective, and obedient to the rules that apply.