skip to main | skip to sidebar
Home » Economic » Treasure trove of Flor Do Mar and Tomoyuki Yamasita in Indonesia, estimated to reach tens of billions of US Dollars

Treasure trove of Flor Do Mar and Tomoyuki Yamasita in Indonesia, estimated to reach tens of billions of US Dollars

The Indonesian nation has a very wide area, both starting from the main land to the waters. It is said that in some areas of this resource rich country, it is said to be a treasure trove that has fantastic value. Even if the exchange rate is in US Dollars, maybe the value is estimated at tens of billions of US dollars.

The treasure that was mentioned was saved, there was a time in the kingdom era in the archipelago, up to the time of the proclamator Ir. Soekarno both during the Portuguese and Japanese colonies. Until now, the treasure is still stored and buried in the Indonesian land.

To note, Treasure is a large number of assets or other hidden assets, as well as those found but unknown origin. Hidden words come from Qarun or down, who were leaders in the time of Prophet Moses as mentioned in the Al - Qur'an. The following treasure is said to be buried in the Indonesian earth :

Read Now : In addition to Greece, the 2 countries where the greatest treasure of the treasure was discovered were also the world

1. Treasure in the Flor Do Mar Ship Ruins (Malacca Strait)

Flor Do Mar is a Portuguese ship that sailed around the Straits of Malacca with a lot of booty. It is estimated that there are around 60 tons of gold and diamonds and gems. Unfortunately, the ship sank in the Malacca Strait, and until now it cannot be found anymore.

The treasure at that time was estimated to be worth up to 60 billion dollars. A fantastic amount of economic value, so that many treasure hunters are obsessed with looking for it. Sadly, the searches carried out always end in disappointment, this is like experienced by Robert Max. The man known as Robert Max, has spent a budget of around 200 billion IDR just to fill this failed mission.

Overview of the Flor Do Mar Ship

Flor do Mar or Flor de la Mar (Sea Flower), is the name of a Portuguese ship which for more than nine years determined important events in the Indian Ocean, until its sinking in November 1511.

The ship disappeared off the coast of Sumatera (Indonesian) when the nobleman Afonso de Albuquerque returned from the conquest of Malacca with a large treasure for the Portuguese king. (Wikipedia / auth)

Tomoyuki Yamasita is a Japanese general who was executed in the Philippines. He committed many crimes until he was executed. Before Yamasita was executed, he was assigned to carry a large amount of gold bars, booty during the Second World War.

Unfortunately when Japan began to lose, Yamasita hid it in a cave on Java. Now the treasure has not been discovered yet. It is probable that the treasure is still hidden in a cave that has not been found on the island of Java. If the treasure is found, the value is fantastic. Possible because of the large number of gold bars, if dikurs in US dollars, it might reach tens of billions of dollars.

On 23 February 1946, the United States military court in the Philippines executed General Tomoyuki Yamashita. He was hanged on charges of committing war crimes during World War II.

The death of Tomoyuki Yamashita on the hook because of the second world war crime, while opening one of the biggest mysteries. Right after 68 years after the death the general was still a legend. One of the biggest treasures in the world is believed to be General Yamashita's heap of gold. The assets were the spoils of war of the Japanese army in Indonesia, Singapore, the Philippines and other Southeast Asian countries during World War II.

Tomoyuki Yamashita is called the Malayan Tiger. At the beginning of World War II Yamashita easily captured Singapore which was maintained by joint British and allied forces. 30,000 Japanese troops captured 130,000 British, Indian and Australian soldiers. Throughout history, this is the record for most British soldiers surrendering.

Apparently besides fighting, the Japanese empire imposed a special mission on General Yamashita. They were ordered to collect as much gold as possible from colonial countries. There is a special organization called Kin No Yuri or Golden Lilies. Emperor Hirohito's brother, Prince Yasuhito, is believed to be the chairman. They seized gold from Southeast Asia and then collected it in the Philippines, then shipped it to Japan. (merdeka.com/ auth) 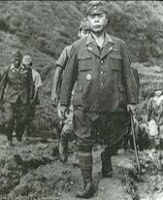 The shipment of gold and valuables to Japan has been successful several times. From this booty gold Japan financed wars in the Pacific. A battle front that extends from Manchuria to the Solomon Islands. Surely this drains enormous costs. But since 1943, booty cannot be sent to Japan. The reason was that the Japanese fleet had lost in the ocean.

Japan does not have enough warships or warplanes to escort the golden ships. Allied warplanes and submarines are ready to forbid passing Japanese ships. Around 1945, Japan had almost lost completely. Prince Yasuhito, General Yamashita and several other officials blew up tunnels and caves to cover gold deposits in underground caves.

Information circulating, there are around 6,000 tons of gold, and countless more how many gems and other assets. This is only the number in the Philippines. Not yet in Indonesia, Singapore, Burma, Malaya and other regions. It is suspected that many still cannot be transported to the Philippines to be combined.

It's been decades, Yamashita's gold is still a mystery. Hundreds of treasure hunters are looking for it. A man named Rogelio Roxas claimed to have found a buddha statue of a diamond, and pure gold from a Japanese tunnel in the Philippines. He suspected that the discovery was only a small part of Yamashita Gold...

Read Now : THIS IS HE, SEVEN (7) COUNTRIES WITH FASTEST ECONOMIC GROWTH IN WORLD
Share this article :