skip to main | skip to sidebar
Home » Health » Valves of the heart and blood vessels become stiff or weakened, beware that is another symptom of Alkaptonuria

Valves of the heart and blood vessels become stiff or weakened, beware that is another symptom of Alkaptonuria 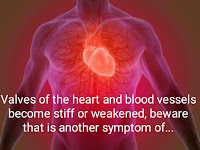 A rare abnormality experienced by someone when there is a build up of homogentic acid (Homogentisic acid) in the body, scientifically called Alkaptonuria.

As a result, urine or some parts of the body appear dark or black over time, causing a number of health problems.

Alkaptonuria is a genetic disorder in herited from parents. The symptoms of this disease are often ignored at first and only visible after the sufferer reaches the age of 20 or early 30 years.

This occurs because the buildup of acid homogentisate occurs slowly. As a result of the build up of the substance, cartilage, tendons, bones, nails, or ears become dark or blackish in color.

Alkaptonuria sufferers can still live normally, even though their quality of life can be disrupted due to problems with joint pain or heart problems.

Read Now : Recognize, Never To 1 From Seven Symptoms Of Chronic Ulcer It's On You...

Symptoms of alkaptonuria can occur from infancy, although often these symptoms are ignored because initially they are not clearly visible. At the time of the baby, the initial symptoms are usually marked by black stains on the baby's diaper.

Symptoms appear clearer as you age, especially in the eyes, ears, nails or skin, and other body organs. These symptoms include:

1. Symptoms of nails and skin.

- In the form of sweat discoloration, the nails turn blue, and the skin color changes, especially on the forehead, cheeks, armpits, and genital area.

- In the form of brown or gray stains on the white part of the eye.

4. The initial symptoms of osteoarthritis.

- Like pain or stiffness in the joints and spine, shoulder, pelvis or knee. These symptoms generally begin to appear from the age of 20 or 30 years.

Under normal circumstances, the body will break down two compounds forming proteins (Amino acids), namely tyrosine and phenylalanine through a series of chemical reactions.

But in alkaptonuria conditions, the body cannot produce sufficient amounts of the homogentisate oxidase enzyme. The enzyme, needed to break down the results of tyrosine metabolism in the form of homogentisate acid.

As a result, homogentisate acid accumulates and becomes black or dark pigments in the body, while others are released through urine.

The inability of the body to produce a homogenticate oxidase enzyme is caused by a mutation in the gene producing the enzyme, the Homogentisate 1,2 Dioxygenase (HGD) Gene.

This disorder is inherited autosomal recessive, which means that the mutation of the gene must be derived from the two new parents causing this disorder, not just one.

Read Now : Remember Besides Alcohol, 4 Habits That You Consume It's Very Dangerous To The Heart Function

Treatment steps need to be taken immediately when someone is diagnosed with alkaptonuria. If this condition is detected while still a child, the action that can be taken is to slow down the rate of disease by applying a low-protein diet to reduce levels of tyrosine and phenylalanine in the body.

In addition, the medical authorities will also recommend the administration of vitamin C to slow down the buildup of acid homogentisates in bone and cartilage. Another treatment that can be done is by giving a drug called nitisinone.

Although until now there has been no drug that can specifically overcome alkaptonuria, nitisinone can be given to reduce the levels of homogentisate acid in the body. Nitisinone is a inhibitor of enzymes that form homogentisate acid.

In order to overcome the symptoms, or prevent complications that can be caused by alkaptonuria, tentunys will advise patients to:

2. Undergoing Physiotherapy was carried out with the help of a tool called Transcutaneous Electrical Nerve Stimulation to make the spinal cord nerve become numb so that the pain subsided.

3. Do moderate exercise regularly, people with alkaptonuria often experience pain in joints or joints that feel stiff. To inhibit the severity and to help strengthen muscles and joints, patients need to do light exercise, such as swimming regularly.

Other light exercise that can be done such as yoga or pilates. It is recommended to avoid strenuous exercise and be vulnerable to physical contact, such as soccer or boxing, to prevent injury to the joints.

5. If alkaptonuria causes damage to other joints or organs, surgery may be recommended by the medical staff to the donor.

This procedure is performed in half of cases of alkaptonuria sufferers above the age of 50, or 60 years. And the type of surgery that is usually performed on the joint is hip or knee replacement surgery.

Mean while, for the type of surgery on the heart organ which is generally done when the heart valve hardens, it is a heart valve replacement surgery. Already understand, how to prevent and treat it, if this article is useful please share it with relatives or friends...

Read Now : Do not Ignore Digestive Health Channels Your Heart...
Share this article :

Posted By - Hanny & Melissa On Friday, May 17, 2019
Email ThisBlogThis!Share to TwitterShare to Facebook
Label: Health