skip to main | skip to sidebar
Home » Economic , Financial » The price is cheap, Raven Coin is one of the best new coins for investment

The price is cheap, Raven Coin is one of the best new coins for investment 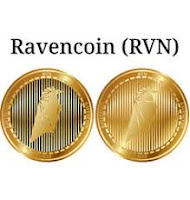 The miners forget if there is a new coin that is quite interesting. The coin is called Raven. This coin is different from many other new ICO coins. Where, the coin display the website looks very practical, and at a glance if seen almost sure Coin is focused on its technical orientation, compared to ICO sales.

Of course the Raven coin is inseparable from the world of Game of throne and westeros, maybe the creator really likes this HBo series. According to the whitepaper, the history of cryptocurrency hashing problems starts with the SHA256 algorithm used by Bitcoin. Then, followed by Scrypt for Litecoin, then following the Ethash algorithm for Ethereum, X11 for Dash followed to - X13, X15 and to - X17.

Read Now :  If price is not a reliable measure for determination, is Omisego (OMG) a good investment or not ...?

Due to the value of bitcoin that continues to rise, causing many more benefits to be gained when we do parallel mining, mining lately many switches to the GPU (Graphics card).

After market mining became crowded, there came an idea to do mining Field-programmable Gate Arrays (FPGAs) that have more than the GPU. So the next step by step is the number of Application Specific Integrated Circuits (ASICs) machines made by Bitmain companies with more efficient models, specifically ASIC.

A less good thing for ASIC mining is the side effects of mining, which makes mining a central thing. Even though everyone can buy this mining machine, there are still many other problems such as the length of delivery, the monopoly that is mostly done in China.

Furthermore, Coin Raven with the X16R Algorithm tries to answer this problem. This is to reduce the problem of dependence on ASIC miner. The new algorithm is considered very efficient in determining the future, as well as the mining ecosystem itself.

Where everyone can do mining without relying on X11 machines. And now the Raven coin value reaches $ 0.05 on the marketcap, the coin is one of the good coins to invest because the price is quite cheap.

Posted By - Hanny & Melissa On Tuesday, May 07, 2019
Email ThisBlogThis!Share to TwitterShare to Facebook
Label: Economic, Financial