skip to main | skip to sidebar
Home » Health » The disease is cough accompanied by bloody phlegm or pus. Then, why does that happen ...?

The disease is cough accompanied by bloody phlegm or pus. Then, why does that happen ...? 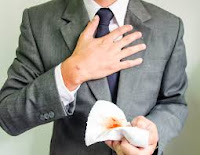 Organs in the respiratory system (Respiration) and associated with the circulatory system (Circulation) of vertebrates that breathe with air, and these organs exist in living things including humans.

Its function is to exchange oxygen from the air with carbon dioxide from the blood. The process is called "external breathing" or breathing, it is known as the lung. However, these lungs can also be infected with bacteria.

Bacterial infection of the lungs that causes pus to be known as a lung abscess. The main symptom of lung abscess is coughing up phlegm.

Sputum that is released often contains blood or pus, and smells. Lung abscesses are treated with antibiotics. Sufferers are required to take antibiotics for several weeks until the infection subsides.

Patients who undergo treatment well have a high cure rate. Conversely, if not handled properly, this disease can cause complications or even death.

Read Now :  Chikungunya disease can cause paralysis, do this before he infects you

The main cause of lung abscess is the appearance of infection in the lung tissue due to fluid, or food containing bacteria that directly enters the lungs...

This event occurs when a person is unconscious due to the influence of alcohol or drugs, especially sedatives. Besides caused by foreign fluids that enter the lungs, lung abscess can be a complication of other diseases, both diseases in the lungs themselves and outside the lungs, namely:

2. Bronchiectasis, namely widening, thickening, and damage to the respiratory tract tissue before the lungs (Bronchi).

3. Cystis fibrosis, which is a respiratory tract disease that causes mucus in the respiratory tract or phlegm to become thicker. The thicker mucous fluid will clog the flow of breath from or to the lungs, so that it can trigger infections that form.

4. Peritonitis, which is an infection of the lining of the abdominal cavity (Peritoneum).

5. Endocarditis, which is an infection of the inner heart wall.

Alcoholics also have a weaker immune system so that infections are easier to occur, that's the risk of lung abscess...

Alcoholics are a group of people who are most susceptible to lung abscesses, due to reduced awareness and frequent vomiting.

This condition causes fluid from the stomach or from outside which contains bacteria easier to enter into the lungs and cause infections and abscesses.

Alcoholics also have a weaker immune system so that infections occur more easily. Alcoholics who are currently or recently suffering from pneumonia have a high risk of developing a lung abscess.

In addition to alcoholics, several factors that can increase the risk of lung abscess are:

1. Weak immune system, such as cancer patients and HIV, and taking drugs that reduce body resistance.

3. Being under the influence of drugs or sedatives.

Read Now :  Not all black spots on the face can be treated with liquid nitrogen, the risk of bleeding and hypopogmentation

Cough is the main symptom of lung abscess...

Cough that occurs accompanied by phlegm containing blood or pus is the main symptom of lung abscess, other than that other symptoms that can appear in patients are:

Some types of antibiotics that can be given to people with lung abscess...

The main treatment taken to treat lung abscesses is antibiotics. The medical will prescribe antibiotics according to the results of the bacterial sensitivity test so that the drug given is in accordance with the type of bacteria, so that it works effectively.

Some types of antibiotics that can be given to people with lung abscess are:

The duration of antibiotic treatment that the patient will undergo varies depending on the severity of the abscess. Treatment of lung abscess is quite long, which can reach 3 weeks to 6 months.

In patients with secondary lung abscess it is usually recommended to undergo treatment in a hospital to help treat diseases that trigger abscesses.

In some cases, patients can undergo treatment through surgery to eliminate abscesses. The surgeon will insert a tube into the inside of the lungs, then the pus contained in the abscess is sucked out.

Lung tissue that is damaged by abscess is then removed. To help the healing process of an abscess, patients will be asked to stop drinking alcohol and not smoking. Patients will also be encouraged to drink more water. good rest, and hopefully always healthy ...

Posted By - Hanny & Melissa On Saturday, May 04, 2019
Email ThisBlogThis!Share to TwitterShare to Facebook
Label: Health