skip to main | skip to sidebar
Home » Political » After the Indonesian General Election, Padang Cuisine was made a boycott issue

After the Indonesian General Election, Padang Cuisine was made a boycott issue 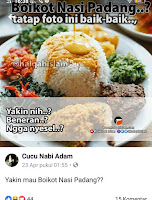 The issue of the Padang rice boycott was crowded on social media, it was related to the alleged defeat of Jokowi-Ma'ruf Amin in the quick count version of the Indonesian general election, in West Sumatra.

Started from the status of a netizen on Facebook, who invited the public to no longer eat Padang rice to avenge the defeat.

The proof, many netizens feel unable to stay away from Minang's unique rice mix concoction. they were busy writing opinions while including appetizing photos of Padang rice, to convince the public not to care about the issue of Padang's rice boycott

Padang rice boycott is indeed expected not to occur, considering Minang or West Sumatra cuisine is a cultural heritage that must be maintained.

Read Now :  Only 6 Region Only In Asia, One of Indonesia

Padang rice is also a favorite food of many people, and its popularity has spread to foreign countries. One of them is the rendang or side dish of Padang rice, which has been named CNN Go's as the world's 11th best food in July 2011.

Not long ago, this ranking rose to the top position in September of the same year. Continued in July 2017, rendang remained in first place. this result was obtained from the most votes in polls via Facebook. 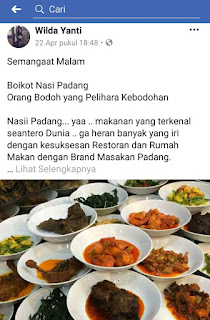 Furthermore, in the latest online world food atlas, Taste Atlas, rendang is also recommended as a food that must be tried by foreign tourists. Of course along with satay, warm, and soto.

Another fact that Padang rice is so popular in foreign countries, is when Norwegian Caucasians Audun Kvitland created a special song about Nasi Padang in 2016. Audun claimed to be crazy about Padang's rice flavor, until he gave birth to the song.

Read Now :  Police Raids Can Be Avoided Through the Internet, Correct What Not Yes ...?

Meanwhile, it is still in our memory when the late Anthony Bourdain tasted Padang rice at the Surya RM in Lower Dam. The host of 'Part's Unknown' is trying out rendang and snapper head fish.

An employee at the Padang food court, informs him that Bourdain likes rendang. "Almost all tried with Anthony Bourdain, and his crew. But the most preferred was rendang, head snapper and Padang-style fried noodles." He said one of the employees of the Padang restaurant in Indonesia

To note, Nasi Padang is white rice served with a variety of Indonesian dishes. Padang refers to the capital city of West Sumatra province, the home of the Minangkabau people.

Padang rice is a buffet full of dishes served with meat, fish, vegetables, and spicy food eaten with white rice, it is the most famous export commodity and the Minangkabau community has a large contribution to Indonesian cuisine. This means that native food can be said to be one of the economic boosters for society.

Padang restaurants are usually marked by a Gadang House-style building (Its oval and curved roof) and its distinctive style. Padang Rice storefront in front of the restaurant usually consists of plates and bowls stacked in such a way, arranged and filled with various dishes. Padang restaurants, especially the small ones, usually use names in Minangkabau.

Posted By - Hanny & Melissa On Tuesday, May 07, 2019
Email ThisBlogThis!Share to TwitterShare to Facebook
Label: Political