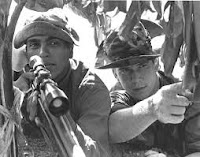 Sniper or sniper is an infantryman who is specially trained to have the ability to kill enemies hidden from a distance, using a rifle.

This term appeared in 1770 to British Colonial warriors in India, from the word snipe, a type of bird that was very difficult to approach and shoot.

For a sniper, when fighting must have stamina and mental steel. That is because, to kill one selected target requires high level of patience, and full concentration.

This is like experienced by Carlos Hathcock or the great sniper of the US Marine Corps (USMC). As a sniper, Carlos Hathcock's natural talent has been seen from childhood.


Read Now :  This is the 6 countries that you never know the same

During his teenage years, Hathcock, who lived in the village of Little Rock, Arkansas, was used to holding firearms and going hunting alone or accompanied by his dog. While hunting, Carlos even assumed the target was shot as a Nazi soldier.

Carlos's proficiency in hunting increasingly became apparent when his father gave a former WWII rifle. Not only wants to be a master hunter, Carlos also intends to join the US military if he is old enough. 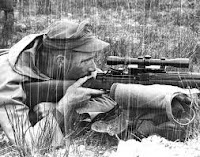 When he was 17 years old Carlos was admitted to the US Marine Corps and immediately underwent basic military training. Carlos ability as a sniper was immediately discovered when he was practicing shooting at the USMC education center, Camp Pendleton, so that the instructors always sent Carlos at each shooting competition.

While stationed at Company E, 2nd Battalion, 4 th Marines, Hawaii, Carlos managed to win the Pacific Division shooting competition easily. After the assignment in Hawaii, Carlos was withdrawn again to the US and placed at the Marine Air Station, Cherry Point, North Carolina.

The variety of repetition of the shooting was won by Carlos with a score of 248 while the highest value that could possibly be achieved by the snipers was 250. The value of 248 that has been solved by Carlos has not surpassed until now.

In 1965 when USMC held a Wimbledon Cup shooting contest at Camp Perry which was followed by more than 3000 shooters, Carlos again won a race that among USMC was the most elite shooting competition. In 1966 when Carlos was stationed in Vietnam which was then hit by a major war involving tens of thousands of US troops, his main task was not as a combat force but the Military Police.

Carlos role as a new sniper was accomplished when Marine Captain Edward James Land planned to promote the availability of snipers in every platoon of the Marines. As the winner of the Winbledon Cup shooting championship, Carlos was then placed on the famed fierce battlefield, Hill 55, with the specific task of crippling Vietcong officials and North Vietnamese Troops and crippling as many of the opponent's snipers as possible.

Carlos presence, which was accompanied by experienced spotter, and happened to be raised in the Pacific region with a tropical climate, helped Carlos a lot. Carlos precise shot immediately took its toll. Dozens of Vietcong personnel and South Vietnamese troops were killed by Carlos's deadly shot armed by Winchester Model 70.

In addition to eliminating the enemy he had managed to settle, Carlos also got a special assignment to eliminate specific targets. The two big targets that Carlos had dealt with were interrogators from France who served in the Vietcong forces.

The notorious interrogator was tasked with torturing captive US pilots by asking questions accompanied by cruel torture. The terror that French interrogators have always carried out around Hill 55 is so well known and frightened the US marines.

After careful deposition, one of the Winchester Model 70 bullets fired by Carlos finally succeeded in overthrowing the troubled French interrogator. Another task for Carlos was very challenging and needed patience and high stamina when he got a secret mission to kill one of the North Vietnamese generals. 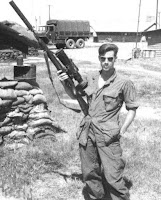 Need high time, skill and patience to reach the General's tent and always be in extra tight guard. For three days Carlos did not sleep and continued to crawl near the position of the North Vietnamese general in his tent. After crawling approximately 2.5 km, it was taken slowly and almost took four days. And on that fourth day, at a distance of 731.52 meters, the general was seen out of his tent.

A single shot from Carlos gun hit right in the chest and the target of the North Vietnamese general fell dead. To avenge the death of its top, North Vietnamese forces immediately launched a massive number of artillery and mortar shells into the position of US troops who were on Mount 55. 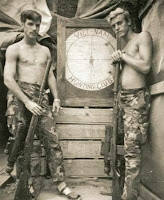 The massive onslaught was also expected to kill Carlos and his spotter who at that time was trying hard towards Hill 55 under the rain of enemy artillery shells. But Carlos, who was already exhausted and lacking in sleep, was finally able to return to his place without the slightest injury.

Carlos even survived until the Vietnam War was over. While serving as a sniper in Vietnam, Carlos managed to kill 93 North Vietnamese soldiers along with other Vietcong guerrillas.

Read Now :  The Easiest Way to Know Who Hijacks Your Android
Share this article :