This is the Deutsche Welle Question On Satellite Slider (Jim Geovedi) 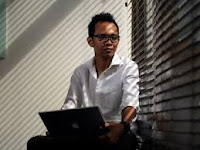 One of Indonesia's hackers is able to build a world reputation. He was famous for hacking satellites, and he was Jim Geovedi.

At a time when almost all information and humans connected to the internet, Jim if he wanted to be able to at any time in and out of electronic mail conversations, or just look at your adultery in the digital world.

More than that, Jim Geovedi could have stolen important data such as bank transaction traffic, corporate financial statements or even observing the state defense system. "If you want I can control the internet throughout Indonesia". Jim said in a conversation with Deutsche Welle.

Observer Informadi Tekhnologi, Enda Nasution claimed to believe Jim Geovedi can do that. According to him, he chose to believe and did not want to challenge Jim to break into the site Deutsche Welle.

Read Now :  A Jim Geovedi figure who can shift satellites

Jim Geovedi is an Indonesian hacker with a global reputation. He went back to Berlin, Amsterdam, Paris, Torino, to Krakow to be a speaker of international hacker meetings that are often wrapped with the name of a security system seminar.

In a world hacker meeting, Jim demonstrates how to hack a satellite, Jim can change the direction of motion or even shift the position of the satellite.

Jim Geovedi has since 2012 moved to London, and set up an information technology security system company with his friends. He handles clients who need security services for satellite systems, banking and telecommunications. Later that time, he claimed interested in developing artificial intelligence computer.

However, Jim Geovedi refused to be called an expert. in an interview, Jim would rather consider himself to be an observer or sometimes an active participant in the art of watching from a distant and secure place.

Jim is not a well-known graduate of Information Technology. he lived a harsh street life in the province of Lampung as a graphic artist, only a graduate of high school in his place.

Luckily at that time, a minister introduced him with a computer and internet. Since then, Jim Geovedi has been self-taught to explore chat rooms of hackers from all over the world. And following excerpts of conversations Jim Geovedi, and Deutsche Welle.

I never hack ... if yes, I will not reveal it in the interview. But I get paid a lot for testing the security system. I have a security company consultant to test applications and networks. My clients start from banking, telecommunications, insurance, electricity, cigarette factory and others.

How do you build a reputation as a hacker ...?.

I did not start with hacking the system, then after famous open the identity and build business security system. From the beginning, I had more social with world hackers than Indonesia, and from there I was often invited to be a seminar speaker or an international media interviewer. A few years after that I began to be noticed in Indonesia.

In 2004, I was asked to assist the General Election Commission (at that time the vote counting center data center was hacked) which was hacked. I was hired to find out who the culprit (A hacker named Dani Firmansyah finally arrested-ed).

When new wireless came into Indonesia in 2003, I was asked to speak in Kuala Lumpur about the danger of the system. In 2006, I was asked to be a speaker on the issue of satellite security systems, and that might make my name go up.

Read Now :  Satelite slider was born in the 70 s

Yes it can, the satellite system is quite unique. The person who can control the satellite must know A to Z about satellite contents. and the only way is you have to get into the operator room or be in the operator's working situation (By hacking-red).

From there you will understand everything, the satellite is launched when, how to control, what system is used. After that you will be able to understand, oh here the weakness of the system.

Which satellite have you hacked ...?

Hahaha ..., I have to be in the operator's environment.

But you can get into the environment from a distance (Hacking-ed) right ...?.

Hahaha..., for one or two cases it can be done.

Which satellite are you hacking ...?

What do you do with that satellite ...?

At that time I was asked to test the satellite security control system and I see, oh this is a possibility to be shifted or rotated a bit ..., then yes ... I slide ..., and it makes them panic because it is rather difficult to return the satellite into orbit.

Good thing they have extra fuel. they say, okay just do not go on. The satellite from China I can slide but if that from Indonesia I change the rotation.

With this ability, how do you overcome temptation ...?

If you want, I can control the internet all over Indonesia. I can divert traffic (Traffic data-red), I can observe traffic coming out or enter Indonesia.

I can modify all financial transactions, with my capacity it may be done. But for what ... ?, I am including a person who is grateful for what I have. I do not have excessive interest in matter.

Read Now :  Be Careful - Do not Get Your Code "SSSS", It's Actually The Meaning of Code in Boarding Pass
Share this article :

Posted By - Hanny & Melissa On Tuesday, May 15, 2018
Email ThisBlogThis!Share to TwitterShare to Facebook
Label: Political